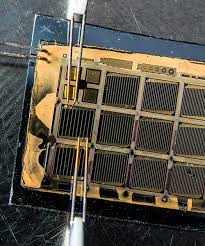 The top honor was claimed by researchers at the National Renewable Energy Laboratory (NREL), who have developed a new solar cell with an efficiency of 47.1 percent. That makes it the most efficient solar cell of any kind in the world – for now, at least. These records have a tendency to be broken pretty regularly.

The device is what's known as a six-junction III-V solar cell, meaning it's made up of six different types of photoactive layer. Each of these is comprised of various III-V materials, named after their positions on the periodic table, which collect energy from different parts of the light spectrum. In total there are around 140 layers, packed into a solar cell that's thinner than a human hair.

It's also worth noting that the record was broken under light focused to be about 143 times stronger than natural sunlight. While the efficiency of this design is obviously going to drop in real-world uses, the team says that the device could be built with a mirror to focus the sunlight onto the cell.

The team also tested a variation of this cell under light equivalent to one Sun, and it still achieved an efficiency record of 39.2 percent.