> Asteroid sneaks past satellites in one of the closest flybys on record - pirateswithoutborders.com

Live With G. Edward Griffin - Did Trump Nationalize The FED?

Tesla Battery Day is finally happening. Here's how to watch 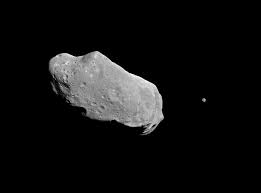 A previously unseen asteroid the size of a truck flew about 4,350 miles (7,000 kilometers) over the Pacific Ocean on Monday, making it one of the closest passes by our planet on record.

Astronomers had no notice of asteroid 2020 JJ's existence, as it was discovered using the Mt. Lemmon Survey in Arizona right around the time it reached its closest point to us.

NASA keeps an online database of close approaches by asteroids and other "near-Earth objects" going back to 1900, and 2020 JJ comes in as the sixth closest approach ever recorded. It should be noted that the top 10 close approaches have all come since 2004. This isn't because asteroids started attacking us in the 21st century. Rather, it says something about how astronomers and their technology are becoming better at spotting ever-smaller and closer asteroids.