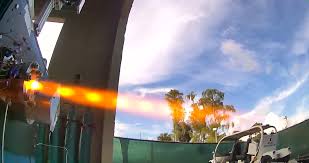 The vast majority of engines, of course, use combustion rather than detonation to achieve their output goals. Combustion is a relatively slow and controlled process resulting from the reaction between fuel and oxygen at high temperatures, and it's very well understood and mature as a technology.

Detonation, on the other hand, is fast and chaotic and much less predictable. An explosion instead of a burn, it is the massive discharge of energy you get when you break apart the chemical bonds holding an explosive molecule together by giving it a jolt of energy – either electrical or kinetic – in the form of a sufficiently powerful shockwave to destabilize those bonds. Detonation is excellent when you want to wreck stuff in bulk, and much harder to maintain precise control over.

But when you need to break the chains of the Earth's gravity and go to space, every gram of weight makes things that much harder and more expensive. Detonation releases significantly more energy from significantly less fuel mass than combustion, so for more than 60 years, rocket scientists have been working on the idea of a rotating detonation rocket as a potential way to cut down weight and add thrust.