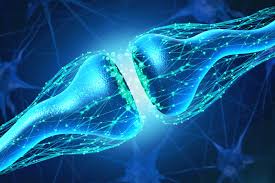 Now scientists have successfully bridged the gap between organic and artificial, with biohybrid synapses that let living cells communicate with electronic systems, not with electrical signals but with neurotransmitters like dopamine.

In the brain, neurons pass signals back and forth across gaps called synapses. This connection gets stronger every time it's called upon, which is the basis for how we learn. The fact that information is processed and stored in the same part of the brain drastically speeds up recall.

That gives the organic brain a huge advantage over traditional computers, which process and store information in separate places. It makes sense then that emerging computer systems are beginning to mimic the structure of the brain, using artificial neurons and synapses.