> Friendliest,' not fittest, is key to evolutionary survival, scientists argue in their new book - pirateswithoutborders.com

Friendliest,' not fittest, is key to evolutionary survival, scientists argue in their new book 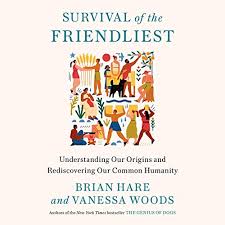 Most people assume that Darwin was talking about physical strength when referring to "survival of the fittest," meaning that a tougher, more resilient species always will win out over its weaker counterparts. But what if he didn't mean that at all?

Scientists Brian Hare and Vanessa Woods, both researchers at Duke University's Center for Cognitive Neuroscience, believe something else has been at work among species that have thrived throughout history, successfully reproducing to sustain themselves, and it has nothing to do with beating up the competition.

Their new book, "Survival of the Friendliest: Understanding Our Origins and Rediscovering Our Common Humanity," posits that friendly partnerships among species and shared humanity have worked throughout centuries to ensure successful evolution. Species endure - humans, other animals and plants - they write, based on friendliness, partnership and communication. And they point to many life examples of cooperation and sociability to prove it.