911 Goes Down Across the Country: Was This a TEST?

Are You Missing These Often Overlooked Necessities in Your Bug-Out Bag?

VW ID. Buggy To Be Reinvented As Affordable Off-Road EV 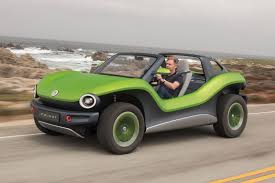 Last year, Volkswagen teased us about its electrified future with the awesome ID. Buggy concept during the 2019 Geneva Motor Show. Back then, the automaker even told us it wants to see the electric vehicle on sale, even though "there is no segment per se in that zone, so this is certainly going to be a niche vehicle." The plans have reportedly changed but there's still some light at the end of the tunnel.

According to a new report from Car Magazine, Volkswagen has ditched its initial strategy for the ID. Buggy. The firm intended to launch a low-volume production version of the EV with help from the Aachen-based e.Go Mobile. However, the company recently filed for bankruptcy leaving Volkswagen on its own in the project.