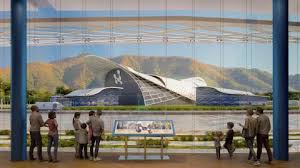 First, mini-nuclear reactors could compete with green energy with hopes of reducing CO2 emissions by 2050.

Gates founded the firm more than a decade ago, is set to build commercial advanced nuclear energy plants called "Natrium" in the U.S. later in the decade.

Future demand from nuclear power is likely to come from plants that are more than 90% smaller than traditional nuclear plants that could revive the stalled industry following Three Mile Island, Chernobyl, and Fukushima nuclear accidents.