> Electric air taxi could take to the Paris skies in time for the Olympics - pirateswithoutborders.com 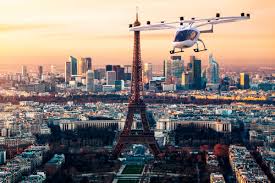 That branch will start with a new air mobility test area at the Pontoise airfield near Cormeilles-en-Vexin to the northwest of Paris, with work starting in the first half of next year.

As a first step in the setup process, the collaboration has put out a call for expressions of interest from international manufacturers and equipment suppliers, energy companies and vertiport designers, operations support firms, research institutes and laboratories, and specialists in unmanned air traffic management or digital platforms. Selected projects will be announced on December 18.

The first industrial partner for the project has already been announced though. Volocopter, which has been flying since 2011 and has already notched up successful test flights in Singapore, Helsinki and Dubai, will test its VoloCity all-electric flyer at the new facility.