Spinning Membrane Space Telescopes Would Be Big, Cheap and Easy 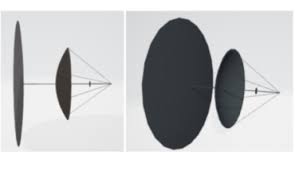 The EST employs a hoop to deploy a slack reflector membrane, such as solar sail material or radio dish. The EST is simultaneously rotated around its center and accelerated along its axis of rotation, the membrane will assume a parabolic shape, thereby creating a reflector for a very large aperture telescope. The EST reflector can be accelerated along its linear axis by tethering its deployment hoop to a tug spacecraft.

Linear acceleration will shape the telescope membrane into a parabola.

A little demonstration EST, with a total mass less than 20 kg, including optics that would be positioned along or suspended from the tether at the parabola focal point, would have four times the light gathering capacity of Webb (about thirty times that of Hubble), while costing on the order of 1/1000th as much.