Causing a buzz: Insect-inspired robot weighs just 0.01lbs and can fly at 1.6mph... 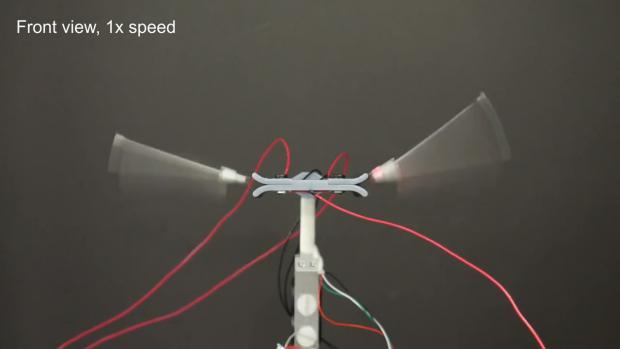 An insect-inspired flying robot with wings that buzz thanks to a new type of electric 'muscle' has been developed by British scientists.

It is hoped that one day the robot will be able to look for survivors in disaster zones such as collapsed buildings, monitor hard-to-reach infrastructure and pollinate crops.

Researchers at Bristol University said its wings are so efficient that they actually provide more power than an insect muscle of the same weight.

'If we can produce more power than insect muscle, it means that we can potentially have better performance than an insect — which is really exciting.'

He added: 'It's very challenging because nature does such an amazing job.'

Until now, typical micro flying robots have used motors, gears and other complex transmission systems to achieve the up-and-down motion of the wings.

However, researchers involved in the study said this had added complexity, weight and undesired dynamic effects.

Instead, after taking inspiration from bees and other flying insects, they created an artificial muscle system called the liquid-amplified zipping actuator (Laza), which achieves wing motion using no rotating parts or gears.