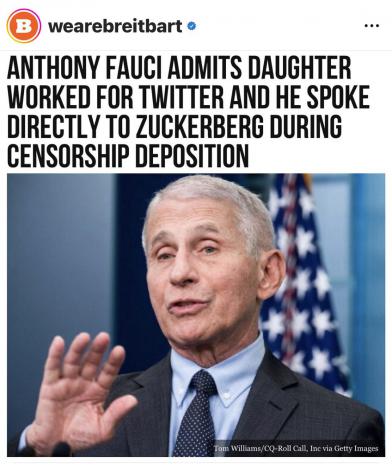 Dr. Anthony Fauci feigned ignorance throughout his November 23 deposition as part of Louisiana and Missouri's lawsuit against the Biden administration and federal officials, asserting that he is disassociated from social media. Yet, the public health official admitted he talked to Facebook's Mark Zuckerberg about pushing vaccines and noted that one of his daughters worked as a software engineer at Twitter.

Fauci, who said "I don't recall" 174 times throughout the deposition, faced questions on his own personal concerns about "what people might be saying on social media" about the Chinese coronavirus's origin. Yet, Fauci feigned ignorance, claiming to be "disassociated" from social media.

"You know, I'm so dissociated from social media. I don't have a Twitter account. I don't do Facebook. I don't do any of that, so I'm not familiar with that. I've never gotten involved in any of that," he claimed. Yet, immediately after, Fauci admitted that he has connections to major players in that sphere, engaging in communications with Facebook's Mark Zuckerberg in the past.