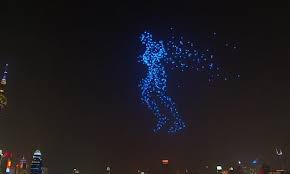 The devices flew above the city of Shanghai creating shapes, text and even the figure of a man running across the sky.

Fitted with multi-colored lights, the drones were controlled by a central computer that programmed them to fly in specific patterns.

The drones took flight on Tuesday night above the Huangpu River, which is part of a growing trend to find alternatives to fireworks, which create noise and smoke pollution and can be a fire hazard.

The devices made giant spheres, created text for the countdown and formed a massive man running across the sky, which is said to represent 'the huge changes and glorious achievements Shanghai has made in the past 40 years of reform and opening up'.

A video shared by CGTN shows the drones flickering during the countdown and then creating a massive '2020' in the sky at midnight.