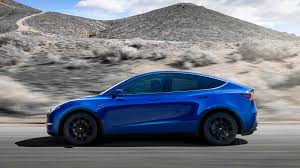 Tesla Model 3 owner Michael Hughes happened upon a Tesla Model Y while Supercharging. He got the rare opportunity to check out the upcoming Tesla all-electric crossover twice over the past few days.

During his time with the Model Y, Hughes learned that the SUV will be making its way onto Jay Leno's Garage soon. He also got to sit inside the Model Y, not only in the front seats but also in back.

Hughes first spotted the Model Y in a parking lot in San Luis Obispo, California. As you can see from the photos, it looks blue or gray, but commenters believe it's actually Tesla's Midnight Silver Metallic color. Perhaps the car on the second day was different from the first?