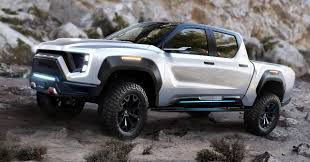 Ostensibly looking to draw on all of the good aspects of the Tesla name, while not associating themselves with a CEO who calls national heroes 'pedos', threatens journalists or puts forth fake buyout bids for his company, Nikola Motors has slowly grown into a formidable hybrid truck design company that's based in Phoenix.

And yesterday, the company announced its competitor to Tesla's Cybertruck: the Nikola Badger.

Initially, Nikola Motors started working on Class 8 style heavy duty trucks for hauling, right around the same time that the ideas for the Tesla Semi, which has still not been mass produced, started swirling.

The company, founded in 2014, expects to begin building trucks at its Arizona factory in 2021. Among those trucks will be the company's entrant into pickup trucks, its new Badger.

Nikola claims that the competitor to the Cybertruck will have up to 980 foot pounds of torque, up to 906 horsepower and an up to 600 mile range. The Badger is said to go from 0-60 in just 2.9 seconds. This compares to the Cybertruck's 250+ miles range and 0-60 time of under 6.5 seconds (if you trust Tesla's specs).