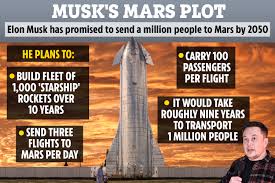 Shotwell said: "Once we take people to Mars, they're going to need a capability to communicate.

"In fact I think it will be even more critical to have a constellation like Starlink around Mars."

She also stressed that Mars and Earth will need to be connected.

Shotwell added: "And then of course you need to connect the two planets as well, so we make sure we have robust telecom between Mars and back on Earth."

That would mean Mars and Earth would have some kind of internet bridge between them.

The SpaceX COO also explained that the company isn't giving up on Earth just because it wants to aim for Mars.

She said it wants to give "humanity another shot in case there were to be some horrible event on Earth".