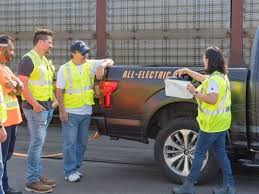 There has been a ton of talk about which company will bring an all-electric pickup truck to market first. The upcoming Tesla pickup truck has been on the radar for some time, though it will be a while before it officially surfaces. Rivian is working hard to beat Tesla to market with its R1T electric pickup. So, what about legacy OEMs, and more specifically, the Ford F-150?

We assume you were dialed in just yesterday when Ford released a video of an all-electric F-150 prototype towing 1 million pounds. While we've heard time and time again that the legendary truck will eventually see electrification, this week's video was a major step forward. Not long after that video surfaced, Ford Chief Product Development Officer Hau Thai-Tang told Yahoo! Finance:

"We have dominated this segment, it's the best-selling truck for 42 years. We think combining Built Ford Tough with electrification exemplifies all of those attributes customers love. We want to build on the leadership we have had."