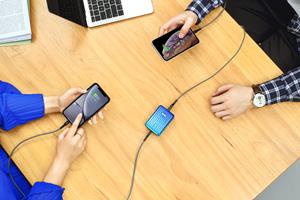 When you think a bit of technology isn't going to evolve anymore, someone finds a way to change it up. For standard wired power banks, there's not much else that can change, as they're already pushing the limits of battery capacities.

However, the team behind a new power bank called the SuperMini actually found a way to squeeze a 10,000mAh battery into a package that's smaller than other ones out there. That means you'll get a high capacity in a package that's about the size of a credit card (albeit quite a bit thicker than one).

The main thing that makes SuperMini stand out is its physical size. It's 3.1-inches long, 2.2-inches wide, and 1-inch deep. In addition to being quite small, it's also pretty light, tipping the scales at 6.35oz. It's about an inch smaller than typical 10,000mAh power banks on the market in terms of length, which makes it quite a bit easier to carry around in a pocket.