Who Really Benefits From The "Iran Attacked Saudi Arabia" Narrative? 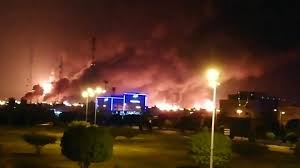 It is possible that this is why there has not been another attack in the US on the scale of 9/11 since 2001; not because the government is doing a better job with security (there was ample security in operation on 9/11 that for some reason was not utilized), but because it's harder for government agencies to get away fabricated disasters or scapegoating the wrong people as the culprits.

That said, sometimes governments don't need to create a false flag from scratch. Sometimes disasters not of the government's making can be turned into false flags, as long as they can pin the blame on the target they most want to attack.

The elites only need to get away with one major false flag every couple of decades to push the populace into a war or a cultural crisis which can be exploited.

This was essentially the strategy outlined by the "Project For A New American Century", a foreign policy think tank in the 1990's made up of Neo-Cons and ghouls from the Council On Foreign Relations which called for a "new Pearl Harbor" that would give the US a rationale to enter the Middle East militarily and change the entire political landscape. As Rahm Emanuel once said, "You never want a serious crisis go to waste..."