> Porsche is working on a FLYING car- - pirateswithoutborders.com

Porsche is working on a FLYING car- 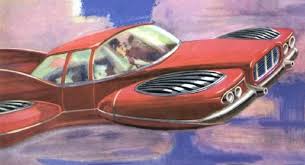 Boeing is already competing with arch-rival Airbus SE and other companies to introduce small self-flying vehicles capable of vertical takeoff and landing.

Earlier this year, the planemaker conducted an inaugural test flight of an aerial car prototype that could accommodate two to four passengers and fly up to 50 miles.