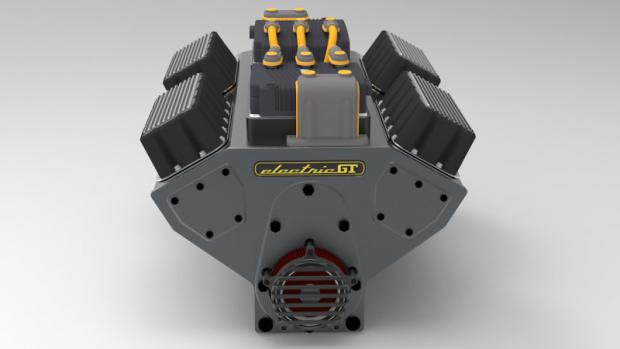 Three years ago, an outfit called Electric GT (EGT), led by Eric Hutchison, hit the green tech radar by converting a 1978 Ferrari 308 GTS to an electric car. Out went the mid-mounted 2.9-liter V8 making 280 horsepower and 181 pound-feet of torque, in went 48 lithium-ion batteries powering three AC51 HPEVS electric motors that cumulatively produced 465 hp and 330 lb-ft. The company's relocated from San Diego to Chatsworth, California, and is back on the scopes at Green Car Reports with what it calls an Electric Crate Motor. The innovation repackages the ICE crate motor methodology into a system making EV conversions easier for the weekend enthusiast. EGT promises a plug-and-play system with "high performance and near zero maintenance," having packaged its one- and two-motor systems into a "motor block" and peripherals that look just like an internal combustion engine.

The block includes everything necessary for the swap to electric except the batteries and the mounting bracket, meaning "motor(s), controller(s), charger(s), sensors, relays and computer systems." EGT has already designed a number of mounting brackets, and can design others to custom specs. According to the web site, the package is "pre-engineered, pre-built, and pre-tested," so installation takes five steps: Bolt in the block, install the wiring harness and cooling system, connect the AC and DC power leads with the OEM-level touch-safe connectors, and route the internal cooling pump to a heat exchanger. Voila, silent running. Every e-crate motor comes with an installation manual, EGT provides tech support, and auxiliaries like electric AC compressors and heaters can be optioned.