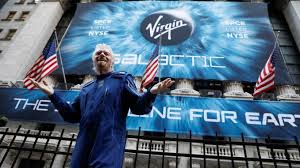 The stock opened at $12.01 as shares of Virgin Galactic rose more than 9%

Hundreds of people, including actor Leonardo DiCaprio and pop star Justin Bieber, have paid or put down deposits to fly on one of Virgin's suborbital flights