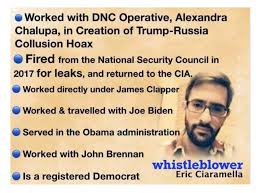 Zaid threatened Donald Trump Jr. after he tweeted the Eric Ciaramella's name out from a Breitbart.com article.

The liberal media is also VERY CONCERNED about Ciaramella's safety.

No one wants to see any physical harm come to the fake anti-Trump 'whistleblower.'

But it is interesting that these same media hacks ignored the HUNDREDS OF PHYSICAL ASSAULTS on Trump supporters the past three years.