> Ammon Bundy On The ENSLAVEMENT Of Mankind & The Virtue Of FREEDOM - pirateswithoutborders.com

Ammon Bundy On The ENSLAVEMENT Of Mankind & The Virtue Of FREEDOM 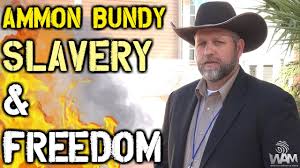 Josh Sigurdson talks with Ammon Bundy about the true defining features of freedom and enslavement and staying consistent in the message of individual liberty and sovereignty. For far too long people have reverted to group think when it benefited their political view or identity. Even some of the most independent individuals revert back to a politically collectivist mentality when aiding their identity. Ammon Bundy has stayed consistent despite it making him unpopular among many of his previous supporters who supported him during his family's standoff over land the Bureau of Land Management attempted to steal. In this video we talk about what property rights really mean, the tools that defend them and the entities that try to remove them. Ammon does an incredible job of explaining his very voluntaryist views.

We appreciate talking with Mr.Bundy. Stay tuned for more from WAM!