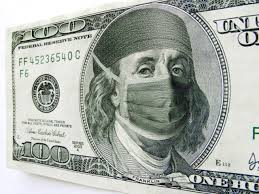 Way back in 2006, the year before I published the first edition of "Cancer? So what?", I knew someone who worked in a cancer research centre on Long Island NY. At the time, I had a gadget available which I thought might bring about the necessary heavy detoxification and, possibly, save the lives of some late-stage cancer patients. I, therefore, offered, via my acquaintance, to supply four of the gadgets free of charge to test. I did not get an immediate response to my offer.

Around six weeks later, I was informed that they would test the gadgets and it would cost me $50,000.00 per patient!  Flabbergasted at such a pecunious response I, of course, asked how on Earth they could come up with such an insane idea."That's the amount of money they would lose if a patient recovered instead of dying" was the reply. (sic)

In the intervening years, I have learned that ensuring that people die of cancer is one of the three big sources of income for the medico-pharmaceutical industry.

Every day, around 1,700 people die with cancer in the US alone. Putting all the countries where health care is dominated by the medico-pharmaceutical industry together we come to around 4,500 to 5,000 deaths PER DAY! Times $50,000 equals at least 225 million dollars per DAY, each and every day; times 365.25 gives us just over $82 billions per year in earnings for the medico-pharmaceutical industry.

At the beginning of the 20th century, cancer was so rare that a family doctor could expect to see three cases during his entire professional career.

There is one famous incident in 1911 (another version states that it was in 1903) when a professor at a medical school called all of his students back from vacation because he had just received a cancer patient: The opportunity to study a cancer case was so rare then that he felt perfectly justified in curtailing their vacation.

Following the First World War, for reasons which I make plain in the book, the incidence of cancer began to rapidly rise. It is still rising and is now, after pharmaceutical medicine and heart attacks, the number three cause of death throughout the First World!

You may have heard of Hoxsey and others who found ways of healing cancer. What happened to them, you may wonder? Some sold their discoveries to the medico-pharmaceutical industry in the expectation that they would use them: Others, such as Hoxsey, refused to sell because it became clear that the intent was to bury his discoveries. He and others were hounded to death but continued to help cancer sufferers almost until their last breath.

No, is the simple answer!

Astonishing as it may seem, the statement can be made that "No-one has ever died of cancer!"

What needs to be understood is that cancer is NOT an illness but a natural, temporary, emergency solution to a very different problem.

At the behest of the pharmaceutical companies which control almost all medical training, medical personnel are focused exclusively upon the suppression of symptoms and are taught nothing about identifying causes and removing them as this would reduce pharmaceutical sales. The medico-pharmaceutical industry proceeds exclusively by attacking symptoms.

As cancer is not a problem but a temporary, emergency solution for a problem, it should be perfectly obvious that attacking the emergency solution whilst ignoring the real problem is a recipe for disaster; hence their extremely miserable "success" rate with cancer. Dependent upon where you draw your statistics, the medico-pharmaceutical industry has a success rate no higher than 12% and some put it as low as 0.2%! It is, in any event, fairly certain that most cancer related deaths are caused by medical treatment.

And "cancer research" to "find" the "cures"?

The owners of the medico-pharmaceutical industry have known and hidden these for many decades. Curiously (perhaps) the amounts collected by donations for cancer research approximately equal the amounts which they spend each year to suppress knowledge of and access to methods which do actually work – methods with success rates of 80% plus because they tackle the real problem.

Methods of dealing with cancer which tackle the cause(s) usually result in your body naturally removing the tumours for which it has no further use.

A cancer tumour is, basically, an emergency method of reducing general toxicity in the body.

One could, reasonably, view a tumour as a toxin storage organ – it's actually more sophisticated than that as I explain in the book.