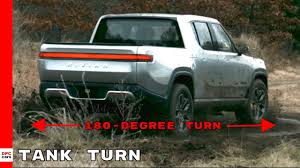 Rivian says that both the R1T and R1S SUV are tank-turn capable, but we suggest leaving this stunt to the professionals, as it's likely quite rough on the vehicle and it seems there's a decent chance that an unskilled tank-turners could quickly lose control of the truck/SUV.

We've seen the R1T do a tank turn before, but the video was quickly removed from YouTube. However, we do know that Rivian has trademarked the term "Tank Steer" which makes an appearance in this video. It has also trademarked the similar term "Tank Turn." This is further evidence that turning on a dime (or close to it) will be a feature at least some Rivian vehicles will have.