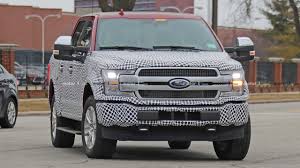 Ford has committed to producing an electric pickup truck and we've seen prototypes in action, but the real truck hasn't debuted yet. Could it look like this?

If not, then what do you imagine it looking like? We assume the conventional F-150 will lend many styling cues to the electric version, but will there be substantial tweaks or just small changes?

Why do we expect the electric version of the truck to closely resemble the conventional F-150? Well, Ford has stated that both trucks will be built at the same plant in Dearborn, Michigan and that a hybrid truck will join the mix too. Additionally, the prototypes we've seen in spy images (here) and in video form towing one million pounds (here) don't look all that different from the F-150 seen on the roads today.

However, there's a new F-150 coming soon, so while this render is based on the current F-150, styling changes that appear on the all-new F-150 would also likely carry over to the electric version of the pickup truck. Ford adds that the electric truck will be highly capable, with "size, strength and power," so we do expect it to closely resemble the F-150 in form and function.