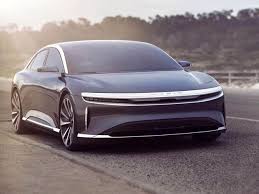 Lucid Motors is ramping up the information flow, now that the reveal of the production version of the Air, a luxury all-electric sedan is just two months away. After going long lengths of time with very little new information, Lucid has begun to open the spigot and show us more details, as they work to build up interest in their first offering.

"With just two months to go before we unveil the production version of the Lucid Air to the world, we couldn't wait to start sharing just a few of the small – but thoughtfully developed – details of the car," said Derek Jenkins, VP of Design, Lucid Motors. "We've placed as much emphasis on the overall design of this car as we have on the core engineering and proprietary technology that goes into it, so we expect the public to be very taken with its look, its feel, and the new level of luxury it delivers."