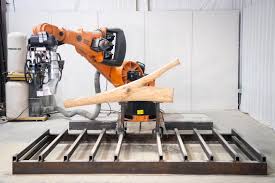 Its concrete base was created with a 3D printer and the wood is beetle-damaged ash cut using a robotic arm previously used in the automotive industry.

Ashen Cabin was designed by Ithaca, New York-based architecture firm Hannah. It measures 10 x 10 ft (3 x 3 m) and its interior is very basic, consisting of just one room with a fireplace, sink, shelving, and a platform for seating or sleeping on.

The cabin's structural base, including its chimney, was built using a 3D printer that extruded a cement-like mixture out of a nozzle in layers, much like we've covered.