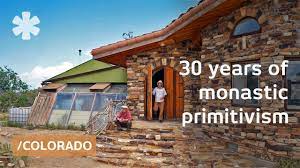 They moved into an abandoned double-wide trailer on their 35 acre property and began raising chickens and goats for milk, as well as tending a large garden. After 17 years in the mobile home, they began to build a larger home themselves, cutting local trees for beams and collecting stones for the walls. It took them seven years to construct the home which is one big "great room" connected to the old trailer by a small door. For cooking and heating, they use a wood-fired stove, as well as the Rumford fireplace they built from plans found at the library.

Many of their appliances are human-powered which they see as "appropriate technology". "One thing you'll notice around here", explains Evan, "Is that if you're going to do things by hand, you're got cranking: almost everything cranks". They hand crank: their grain mill for flour, their ice cream churner, their apple cider press, and even their washing machine which Cheri has dubbed her "Pleasure Washer". Evan has used his extensive collection of primitive hand tools to make everything from cabinet drawers to chair legs.

The couple doesn't feel they are making a sacrifice (except perhaps when dumping the compost toilet in mid-winter) but instead view the extra labor as "play" and something that keeps them healthy in mind and body. The couple generates a minimum income from online classes Evan teaches.

They compare their lives to those of monks and believe the geography of space is important. When Evan found a spot on the property with perfectly-aligned rocks for a dugout, he knew this would be his monastic "sanctuary" or "cell". He spent six years using a pickaxe to dig the underground hut.
For Evan's dugout hut go to: https://youtu.be/XDpZ4jED6zA?t=1200