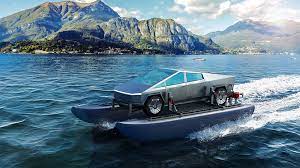 It sees the addition of electric outboard motors, pontoons, and optional hydrofoils in the Foiler model, which fold or collapse into parts to be stored in the vehicle.

They can then be installed "by a single person in less time than it takes to launch a boat."

Elon Musk has previously said the Cybertruck design "influenced partly by The Spy Who Loved Me", and even bought the 1976 Lotus Espirit featured in the film.

Now Cybercat creator Anthony Diamond believes that taking the vehicle onto the water will "pay homage to this passion."