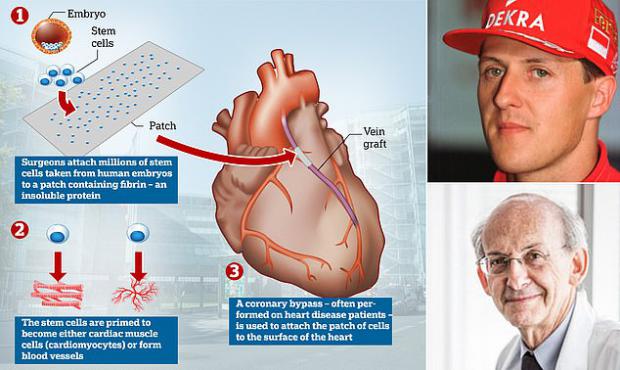 The seven-time world champion has not been seen in public since suffering brain damage in a freak skiing accident in the French Alps almost six years ago.

Schumacher, who spent six months in a coma, was yesterday admitted to a hospital in Paris under tight guard for treatment from a leading heart specialist.

It remains a secret as to what treatment the 50-year-old German will have, although his doctor is described as being a 'pioneer in stem cell surgery against heart failure'. His family have been tight-lipped about Schumacher's condition since the accident.

Rumours among the French media suggest he will have transfusions of stem cells to fight inflammation caused by the life-altering brain injury. He was scheduled to have the procedure in July - but an 'unexpected health problem' saw it delayed.

Schumacher will be operated on by Professor Philippe Menasche, who sits on the board of directors of the brain and spinal cord institute at a different hospital in Paris, where the pair first met earlier this year.